In 1271, the leader of the Mongol empire, Khan (ca. 1215–ca. 1294), proclaimed the establishment of the Yuan(yoo-en) dynastya series of rulers from a single family. and declared himself emperor of China, but it was not until 1279 that his conquest of China was completed and the Southern Song dynasty fell. The Yuan dynasty (1279–1368) was the first foreign-ruled dynasty in Chinese history to commandeer all of China. With no experience in the running of such a large and complex empire, the Mongols gradually adopted many Chinese cultural and bureaucratic models. Growing factionalismarguments or disputes between two or more small groups from within a larger group. at court, corruption, and the horrors of natural disasters, however, led relatively shortly to rebellion and, eventually, dynastic collapse.

Despite the short duration of the Yuan dynasty, it was an extremely vital period in the arts. Particularly, changes in the style of Chinese painting during this period and the widespread introduction of blue-and-white decorated porcelaina hard, fine-grained, nonporous ceramic ware that is usually translucent and white., as well as innovations in lacquerthe sap of the lacquer tree used to layer upon wood or other materials. manufacture, were crucial developments that affected the arts of the subsequent Ming and Qing(ching) dynasties. The Yuan dynasty built new and reestablished older trade links with the outside world through overland as well as maritime routes. Foreign goods filled the coastal cities and new ideas and technologies flowed in, resulting in robust creative enterprises. Porcelain ceramics painted with cobalttype of glaze composed of cobalt oxide and other minerals that results in a blue color. oxide (which turns blue) before being coated with a clear glazea thin, glass-like coating made of powdered rocks, minerals, ashes, and water. Applied correctly it makes a clay body impervious after firing. The colors of glaze are determined by the mineral oxides used and various aspects of the firing conditions. came to be known as blue-and-white porcelain and began to be widely produced in Jingdezhen(jing-duh-juhn) in south China for domestic consumption and for trade, especially to the Near East. The Yuan court established some regulatory control at Jingdezhen, which became the most important center of porcelain manufacture in China.

Chinese literatiwell-educated people who are interested in literature., or scholar-officials, the core of the government bureaucracy in the Song dynasty, were largely ignored by the Mongols. They received at best only minor appointments. As a result, many scholars withdrew from public life. Instead, they pursued their own personal and artistic cultivation, often under the auspices of Buddhism(bood-ihz-uhm) a widespread Asian religion or philosophy founded by Siddartha Gautama in northeastern India in the 5th century BCE. or Daoism(dow-ihz-uhm) a philosophy based on the ideas of the Chinese thinker Laozi, who taught that people should be guided by a universal force called the Dao (Way).. They abandoned naturalism in favor of a more abstract style of ink-and-wash painting that celebrated calligraphic brushwork, which utilizes rhythmic brush strokes charged with the movement of ink.

Painting was an important vehicle for self-expression during this period. Landscape painting became unprecedentedly popular among the Yuan scholars. One of the first figures in inspiring stylistic change was Zhao Mengfu (1254–1322), one of China’s most talented artists. He looked at masters from previous dynasties and reinterpreted their classical styles in his own fashion. In a sense, he was creating historical art. In doing so, he opened the way not only for the next generation of Yuan amateur (or literati) painters—notably the Four Great Masters of the Yuan, which included Huang Gongwang (1269–1354), Ni Zan(knee dzahn) (1301–1374), Wu Zhen (1280–1354), and Wang Meng (1308–1385)—but also for all subsequent scholar-amateur style landscape painting until today. Another favored painting genre of the Yuan is bamboo painting (For example, see this painting by Ni Zan). To the proud and secluded Yuan scholars, bamboo itself was a symbola shape or design that is recognizable and has a meaning associated with it. of the true gentleman (it bends but does not break in a wind, returning upright), much like the scholar who maintains their integritythe quality of being honest and having strong moral principles. no matter how adverse the circumstance is. 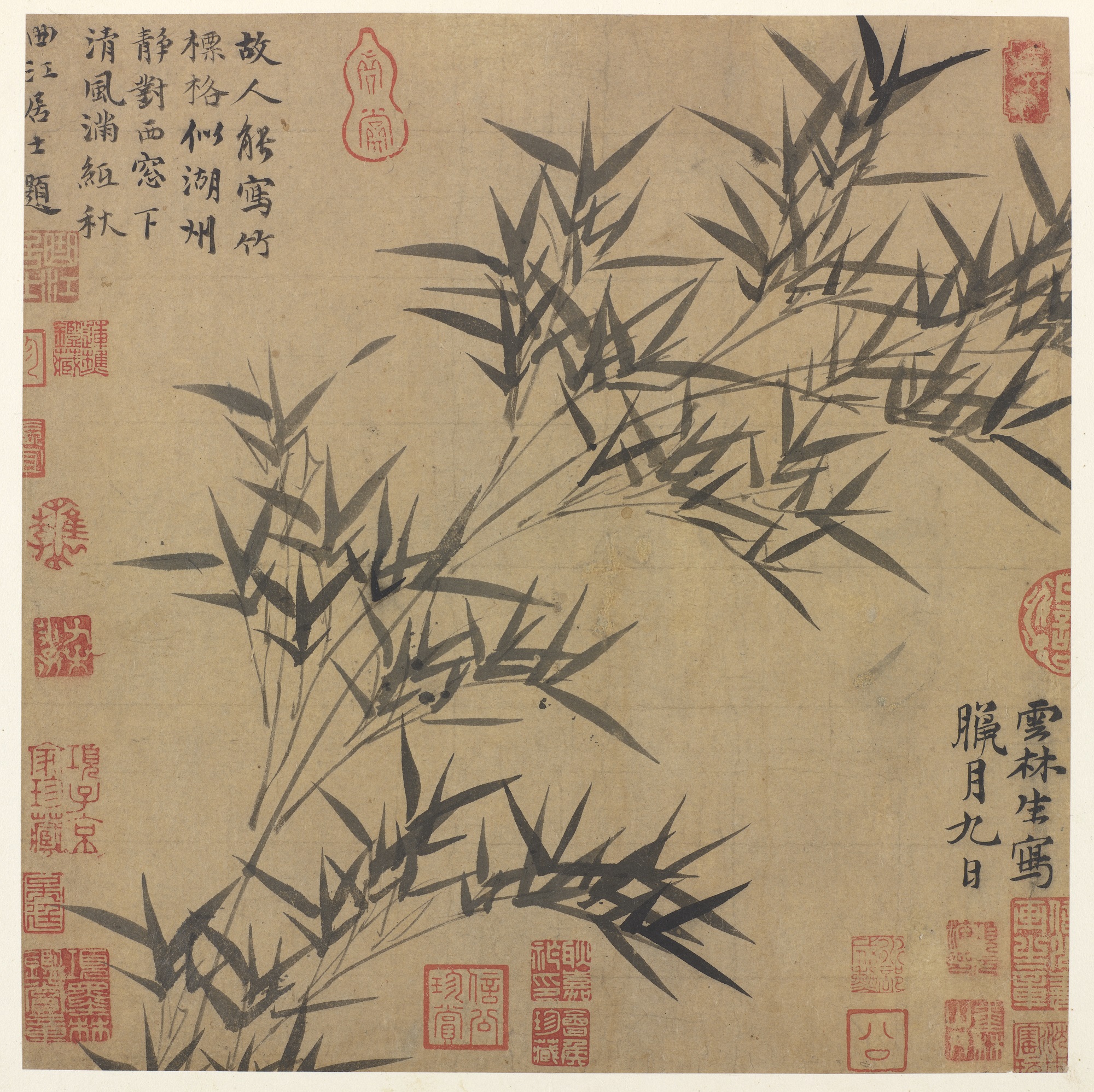 Students will analyze the painting A Branch of Bamboo along with the poetry printed on it. Then, students will create their own Chinese quatrain, a jueju.

Object: A branch of bamboo