The Period of Division (220–589) refers to the four hundred years between the fall of the Han dynastya series of rulers from a single family. and the reunification of China by the Sui(sway) dynasty. Despite its political and social instability, this era witnessed a flourishing of culture, ideas, and art comparable to that of the European Renaissance.

After the Han dynasty fell in 220, China was divided into the Three Kingdoms of Wu, Wei(way), and Shu(shoo) a region in southwest China, modern-day Sichuan province.. In 280, the country was reunited under the unstable Western Jin(jin) dynasty. It was constantly invaded by non-Chinese nomadic groups from the north and eventually collapsed in 316. For over a century thereafter, the north was ruled by a succession of sixteen petty kingdoms led by different tribal groups until the Northern Wei dynasty brought the whole of north China under its rule in 439. Thereafter, China was split into two countries—the north and the south. China was divided into a series of states in the north and south and would not be reunited for almost 250 years. A large number of Chinese refugees migrated to the south, where the Chinese established the Eastern Jin dynasty with its capital in Nanjing(nahn-jing). Four more dynasties ruled from Nanjing before the split between north and south was healed.

During this period, the dominant Confucian influence of the Han dynasty gave way to Daoism(dow-ihz-uhm) a philosophy based on the ideas of the Chinese thinker Laozi, who taught that people should be guided by a universal force called the Dao (Way)., which encouraged followers to comply with nature and not challenge natural patterns. Many intellectuals in the south accepted these ideas to escape from the chaos of the times. Buddhism(bood-ihz-uhm) a widespread Asian religion or philosophy founded by Siddartha Gautama in northeastern India in the 5th century BCE. became influential and gained power during this period, too. The Northern Wei rulers utilized Buddhism to better control the predominantly Chinese population. In the south, the first Buddhist temple was built in Nanjing in the third century, followed by almost five hundred temples by the sixth century. The prevalence of Buddhism led to the construction of a number of Buddhist caves, including those of Dunhuang(doo-un-hwahng), Longmen, Yungang(yoo-un gahng), and Xiangtangshan(shee-ahng tahng shahn) (F1921.2). Buddhist images were carved and painted on the cave walls. Monumental stone sculptures (F1923.15) were cut from quarried sandstone and limestone and set up on temple altars or in temple courtyards. Buddhist art became a major category in Chinese painting as well.

These turbulent years also saw the birth of new aesthetic theories. Painters and poets began to think about the nature and spirit of artistic creation and expression, which led to the development of later figure and landscape painting. Individual artists began to gain attention, such as Gu Kaizhi(goo k-eye-jur) (345–406) (F1914.53). Calligraphythe art of producing decorative handwriting with a pen or a brush. came to its full flowering. Considered the senior visual art form in China, it was appreciated for the beauty created by the brush writing.

China was very open to outside influences during this period. Many parts of northern China were ruled by royal families of foreign origin. Foreign merchants, diplomats, and Buddhist missionaries streamed toward China across the Silk Roadan ancient network of land and sea trade routes established during the Han dynasty (206 BCE–220 CE) that existed until the middle of the Ming dynasty (1368–1644). These trade routes stretched from China across Asia to the Near East, the Mediterranean, and East Africa.. Some settled in China but preserved their native customs and religions. Constant cultural exchanges between China and the West and relative political stability at the end of the period prepared the way for the arrival of the Tang(tahng) dynasty (618–907), a time when trade and culture flourished. 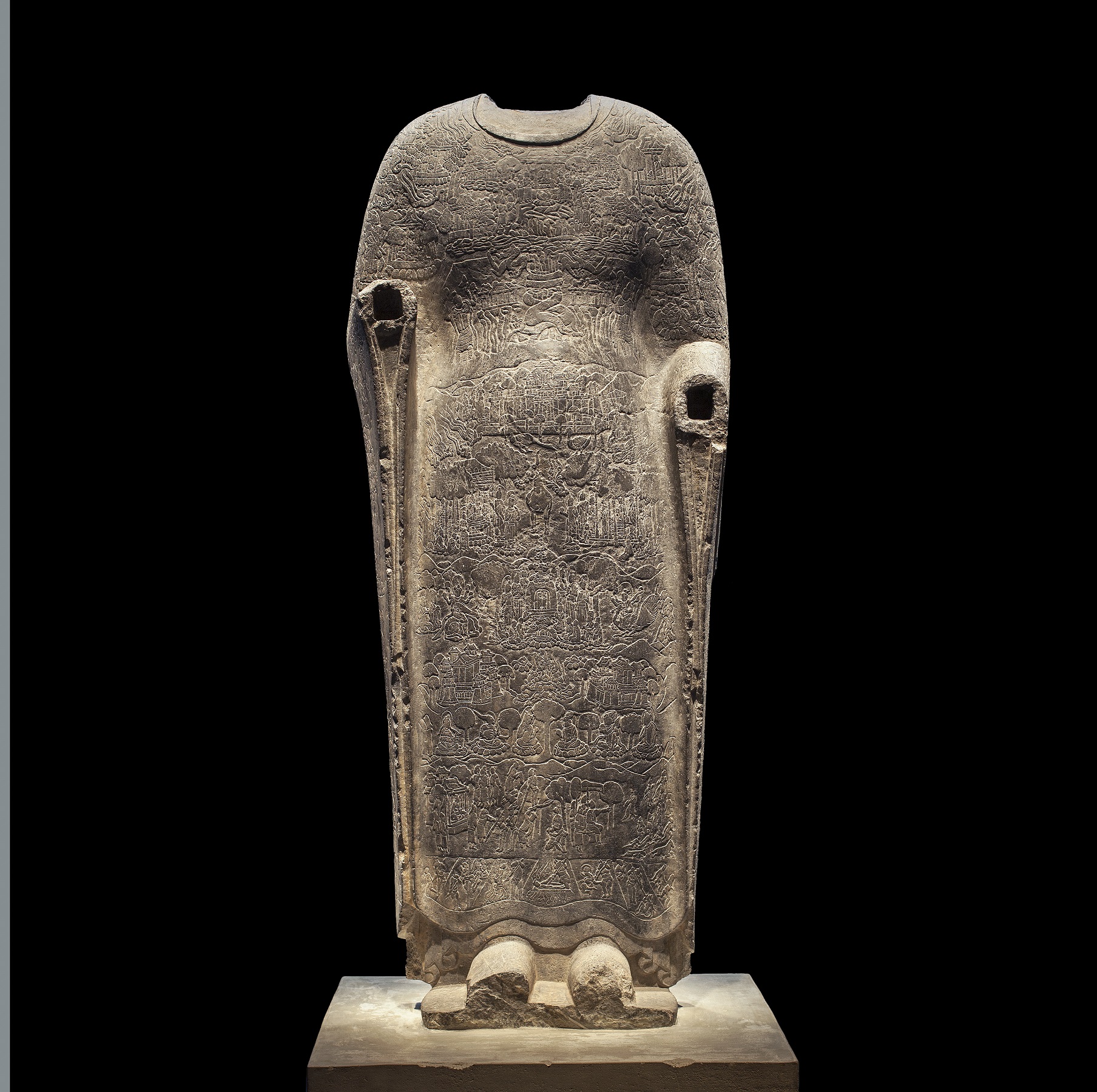 Students already familiar with Siddhartha Gautama, or Shakyamuni, the Historical Buddha, will deepen their understanding of Buddhist beliefs and artwork. They will analyze and interpret works of art that reveal how people live around the world and what they value. They will identify how works of art reflect times, places, cultures, and beliefs.

Students already familiar with Siddhartha Gautama, the Historical Buddha, will deepen their understanding of Buddhist beliefs and artwork. They will analyze and interpret works of art that reveal how people around the world live and what they value. They will identify how works of art reflect times, places, cultures, and beliefs.

Object: Base of a funerary couch

Object: Cosmic Buddha Vairochana with the Realms of Existence