The Han dynastya series of rulers from a single family. (206 BCE–220 CE) reunified China after the civil war following the death of Qin Shihuangdi(chin shir-hwahng-dee) in 210 BCE. It is divided into two periods: the Former (or Western) Han, when Chang’an(chahng ahn) present-day X’ian (Shannxi province); capital of the Western Han dynasty and Tang Empire. (present-day Xi’an(shee-ahn)) was its capital; and the Later (or Eastern) Han, which ruled from Luoyang—230 miles east of Xi’an. The Han dynasty was a pivotal period in the history of China. During its long reign of almost four hundred years, many foundations were laid for enduring aspects of Chinese society.

Philosophy and literature flourished during the Han dynasty. Confucianisma system of ethical and philosophical teaching associated with the Chinese philosopher Confucius (551–479 BCE). He developed a system of thought that stressed the importance of good government, social order, and harmonious and moral living. became the official government orthodoxyauthorized or generally accepted theory, doctrine, or practice.. A civil service was created with entrance examinations based on knowledge of Confucian texts—a system that lasted through the early twentieth century. Daoism(dow-ihz-uhm) a philosophy based on the ideas of the Chinese thinker Laozi, who taught that people should be guided by a universal force called the Dao (Way). continued to grow in influence, however, and Buddhism(bood-ihz-uhm) a widespread Asian religion or philosophy founded by Siddartha Gautama in northeastern India in the 5th century BCE. was introduced from India via the Silk Roadan ancient network of land and sea trade routes established during the Han dynasty (206 BCE–220 CE) that existed until the middle of the Ming dynasty (1368–1644). These trade routes stretched from China across Asia to the Near East, the Mediterranean, and East Africa..

During the rule of Emperor Wu (reigned 141–87 BCE), the Han defeated the Xiongnu(shee-ong noo), a Central Asian nomadic tribal group that resided west of China proper, and gained control of the regions where the Xiongnu lived. China was now in control of the trading routes across the middle of Asia for the first time. These routes extended to the Mediterranean region and the Near East and were later known as the Silk Road. People that lived along the Silk Road exchanged various goods, as well as ideas, religions, and technologies.

Bronzes and jades in the Han dynasty became even more closely associated with affluence and luxury than in any previous dynasty. In contrast to their use in religious rituals during the Shang dynastythe earliest Chinese dynasty verified by scholars, ruling from ca. 1600 to 1050 BCE., these items were now made for grand festivities and display (F1916.155). One special and well-known type of jade object crafted by the Han people was the luxurious jade burial suit, as jade was believed to have preserving power. At the same time, increased contact with India, Persia, and other countries along the Silk Road introduced new symbolsshapes or designs that are recognizable and have a meaning associated with them, motifs, and techniques to Chinese art.

Similar to many ancient civilizations, Chinese people believed in the existence of the afterlife. The Shang(shahng) people were known for the rituala set pattern of behavior for a religious or other kind of ceremony. of human sacrifice. Starting from the Zhou(joe), clay figures were used as substitutes for living humans, placed in or near the graves. The most famous example of this practice is the terracotta army of Chinese Emperor Qin(chin) Shihuangdi. This burial custom became even more widespread during the Han. Varieties of clay models, including servants, musicians, and everyday objects like bowls and utensils, were put in Han tombs for the use of the occupants in the afterlife. Tombs were increasingly modeled on palaces with separate chambers outfitted for different purposes.

Painted narrative scenes started to appear on tomb walls as well as clay and lacquerthe sap of the lacquer tree used to layer upon wood or other materials. objects. Tomb tiles and textiles were also favored media for pictorial depictions. Themes ranged from Confucian ideals and historical events to Daoist mythology and auspicioussuccessful or prosperous; a sign of future success omens. Thanks to the invention of paper, calligraphythe art of producing decorative handwriting with a pen or a brush. as an art form started to thrive in the Han dynasty. Different script styles emerged. By the end of the Han dynasty, the squared lishu(lee-shoo) script, with heavily stressed horizontal strokes, was commonly used by government clerks and became the standard form of writing (RLS1997.48.827). 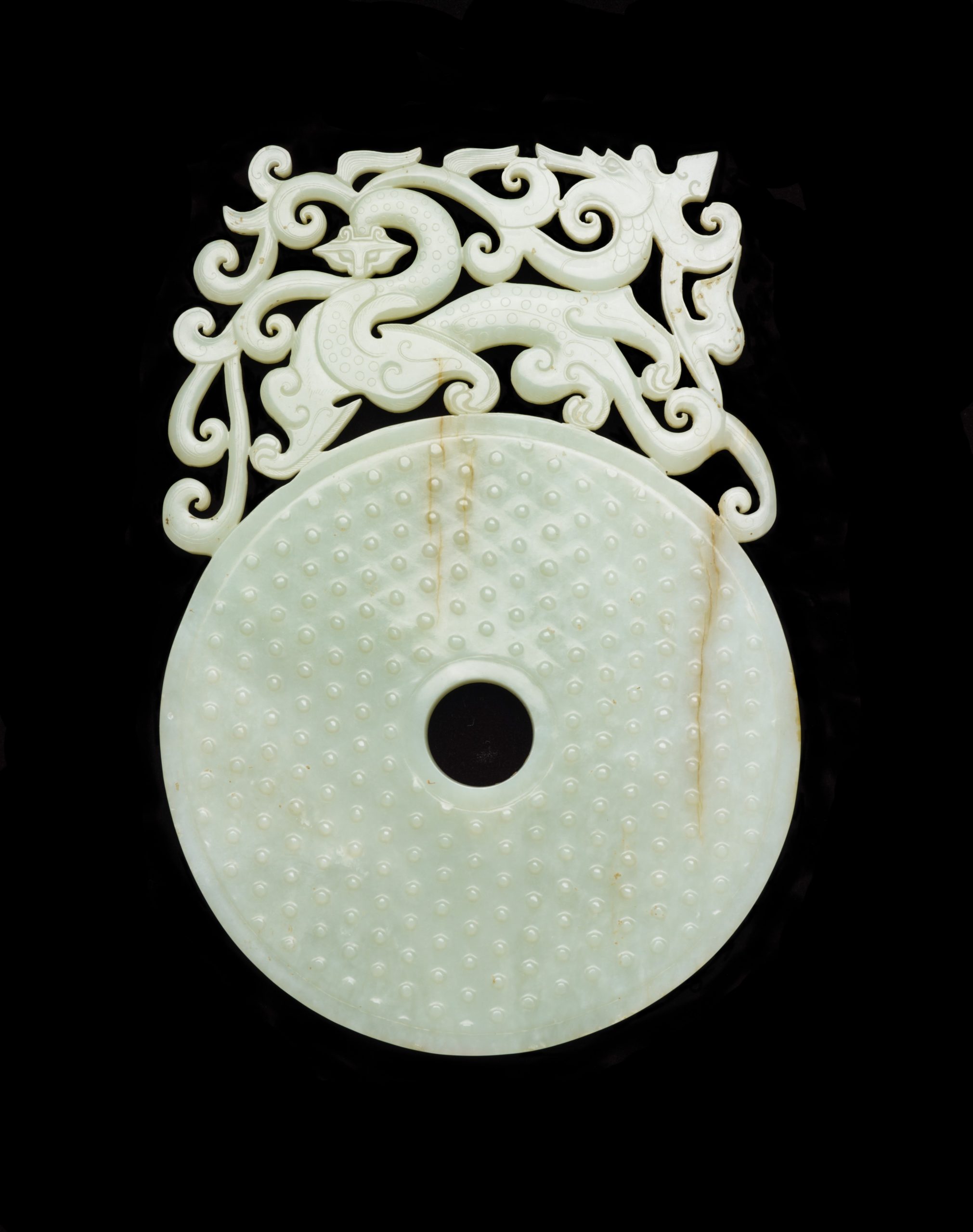 Students will look closely at different symbols of luck used throughout various dynasties in China and examine how luck contributed meaning to objects.