The Bhagavata Purana contains the most revered and authoritative narrative of the life of the Hindu deity Krishna.

This folio depicts a little known event in Krishna’s life. After he defeated the evil king Kamsa and embarked on princely adventures with his brother Balarama, Krishna reunited with his adoptive family at the banks of a river in Kurukshetra (modern-day Haryana). Together they observed a solar eclipse, an event described in the Bhagavata Purana (BP 10.81–82). Although such celestial events were traditionally considered inauspicious, this particular eclipse was predicted to bring blessings to all who witnessed it.

In the seventeenth and eighteenth centuries, the tenth book of the Bhagavata Purana became one of the most frequently illustrated manuscripts in the Hindu courts of north India. This folio is from a manuscript illustrated at a small kingdom, probably Kangra, in the Pahari region. With its lucid line, luminous colors, restrained shading, tender mood, and harmoniously grouped figures, this Bhagavata Purana folio is attributed to one of the sons or nephews of the renowned artist Nainsukh.

The tender relationships Krishna has with members of his adoptive family serve as religious metaphors for ideal interactions between devotees and the divine. In this painting, the mood is sweet, as it must be to evoke the bhava (mood) of devotion to Krishna, but the variety of sensitively observed figural types precludes mawkish sentimentality. The villagers’ act of looking, and their sheer joy at seeing, can also be appreciated as a metaphor for the act of beholding the painting. 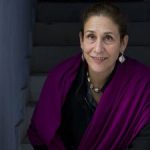