Art history has often been a medium through which students, researchers, and scholars are able to describe and appreciate the cultures and aesthetics of past people and places. Museums and institutions around the world have relied on longstanding, traditional practices of documenting and analyzing art and its history in order to better understand the stories that material objects and sacred spaces have to tell. As a result, digital art history and digital tools used in art history may seem incongruous with the world of paintings, museum archives, and centuries-old research libraries. But as architect, professor, and researcher Dr. Di Luo told me when I sat down for a conversation with her, digital initiatives in art history have the potential to transform the way both the general public and scholars engage with and understand art and architecture. Digital scanning methods, virtual reconstructions of spaces, and photography-based research can come together to redefine an object or space and to allow for a unique analysis that can enrich modern-day art history practices.

Dr. Di Luo served as a guest editor of the fiftieth volume of Ars Orientalis, which showcases six Digital Initiatives articles that focus on the use of digital tools in analyzing sacred architecture in East Asia. She currently teaches at Connecticut College, where she joined our virtual interview. After completing her undergraduate studies at Tsinghua University in China, Di received her master’s degree in architecture and her PhD in architectural history in the United States. She returned to China as a postdoctoral fellow, where in 2017 she received the opportunity to guest edit a section of the newsletter published by the International Institute for Asian Studies. The section focused on the digitization of Buddhist art and architecture, and this theme would prove to be instrumental in the efforts that were to follow. Di worked with eight collaborators to put the section together, and she would work with the same team once again for the six articles about digital initiatives included in volume fifty of Ars Orientalis.

I asked Di about her approach to editing these articles, especially since she had worked with the authors previously and this is the first time Ars Orientalis featured peer-reviewed articles as part of the Digital Initiatives column. “When I first started, I had this simple thought to give readers a sort of big-picture idea of what was going on in the field in terms of research and preservation of Buddhist architecture. The intention was to include as comprehensive a picture of the status quo of digital Buddhology in China as possible,” she said. She added that it was also important for readers to get a behind-the-scenes look at the digitization process: “I wanted to show an entire workflow of digitization from on-site documentation to archiving to interpretation of data sets, using that data for virtual reality projects, and then presenting this material to a larger audience in museums and classrooms.”

While explaining digital art history and the use of digital tools in art, Di commented, “Digital art history is a relatively new term and a new discipline if we think about, say, archaeology. Digital implementation in archaeology has a longer history than [the use of] digital tools in art history.” In China, she continued, digital art history draws upon practices already present in architecture-based archaeology. In the study of Buddhist temples and cultural heritage sites, archaeologists bring with them both traditional and digital methods of surveying sites. One of the most-used tools in her work is 3-D scanning and photogrammetry, a type of 3-D scanning in which computer software determines the object’s dimensions using a group of photographs. In writing for this volume of Ars Orientalis, Di realized that the process allowed her and her colleagues to redefine the way they studied and understood a sacred space or cultural site. She said, “When we physically measured an object, we only recorded its geometry. Photogrammetry allowed us to think about light and visibility. Some of the photogrammetric models I made were unexpected because they had portions missing or distorted [due to absence of light in the photograph], or [they had] a lower visibility or resolution. These weren’t things I had noticed in the field, but I realized these models could show viewers how illuminated a building or space is. Lighting conditions become significant in a religious space. In a Chinese Buddhist temple, for instance, the frontal part is usually very well illuminated, but as you go deeper towards the main image of the Buddha in the rear of the temple, you enter a darker space. This darkening of the interior of a space really adds to the experience a visitor has with it.”

Sharing her thoughts about the implications of the continued use of digital tools in the field, Di said, “I do believe technology has the ability to bring about transformation, but also revolution. Technology has already revolutionized how architects and architectural historians do work in the field—not just for Buddhist architecture, but broadly speaking as well. A very careful and prudent incorporation of technology would revolutionize and invigorate the field.” She elaborated,

“Technology revolutionizes, but also brings us back to the core of humanities. In my work with photogrammetry, I use a camera to capture and record images in addition to drawing and documenting  things by hand, and that really demands a researcher to go to a site to look and investigate; that is, to use your eyes to intentionally see and look at an object. It really goes back to the roots of architectural studies. Digital tools really only enhance that physical, lived experience.”

She added, “I think one of the best things about this tool is that non-experts like students and tourists can create and access virtual models and replicas of sacred sites on their own. I think this is really significant in making our research more engaging to the general public. My conviction is that anyone can do this with the current technology!” She also told me that digitization means that publications can be available and distributed more frequently and therefore reach more people. “A book allows you to show only images, whereas we can present virtual 3-D models on a digital site. This allows for an interactive aspect, which is something I have been moving towards as a scholar. There is also the concept of a virtual museum; although this can never replace a physical museum or actually traveling to a temple space or archaeological site, it allows for preservation of data and research, and a way to engage with objects and spaces even if the physical site no longer exists.”

We ended our conversation by reflecting on the past and pondering what lies ahead. Di was transparent about the shortcomings of digital art history practices: the general public may focus too much on the technology itself and not on what it is trying to show; the technology and necessary devices may not be accessible everywhere; and, of course, virtual initiatives can never be a true substitute for lived experiences. However, especially in light of the ongoing COVID-19 pandemic, they provide a way for engagement and learning to continue. “The kind of documentation we present here would be helpful for visitors, students, and future scholars to get a somewhat immersive experience. For museums, you also have things to offer when an audience cannot be in physical attendance. The development of digital collections and virtual museum spaces would help museums to hopefully survive the pandemic.” My last question for Di was about what she wants readers of her guest-edited articles to keep in mind as they pick up this volume of Ars Orientalis. “Digital tools allow anyone to become an expert,” she said with a smile. “Technology revolutionizes because technology brings democracy, in terms of capabilities of obtaining knowledge. Digital art history is for everyone. It allows you to play around, explore, and have fun. It can bring joy.” 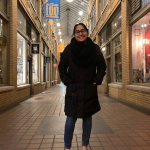 Jaynab Akhtar is a senior at the University of Michigan majoring in biology and history of art. This past summer, she was an Ars Orientialis–University of Michigan Intern at the National Museum of Asian Art, and she enjoyed every second of the experience. Outside of school, Jaynab loves to read, travel, and explore new ways of thinking and writing about art.