For four years, I’ve been away from my family in Taiwan during Lunar New Year, the most important holiday in my culture. It is a fifteen-day celebration of the arrival of spring, filled with feasting. It is also the time of year for families and friends to gather together. This year, I celebrated the holiday in a really special way: being a cultural interpreter for the Chinese paper-cutting and new year pictures activities at the Freer|Sackler’s annual Lunar New Year event. My role was to share traditional customs and ancient mythologies related to the festival. Paper-cutting and new year pictures are both ancient forms of folk art used to decorate the house and invite blessings during Lunar New Year.

Before the event, I had the opportunity to chat with the new year pictures artist, who was surprisingly young. He had traveled to DC from Mianzhu, a small town in Sichuan Province known for its bamboo paper and new year pictures. In Mianzhu’s golden age, it was home to more than three hundred new year pictures workshops. It was touching to see a young person to devote himself to an ancient craft dating back to the early Song Dynasty (960–1279) and to keeping this traditional art alive.

I rarely see new year pictures in Taiwan. When looking at their vivid colors and intricate drawings in person, I wondered how they were produced. The artist explained that the most common method is creating outlines using the woodblock printing technique. Then, artists apply multiple colors by hand. Mianzhu new year pictures are both organism and mechanism, because they are works of art fusing the process of technological reproduction and the human touch.

The artist I worked with most closely was the paper-cutting master from Chengdu, who has been practicing the ancient folk art for more than forty years. In the gallery, the master deftly cut out a huge chun (春) character, which means “spring” in Chinese, using a scissor with red handles and sharp blades in less than one minute. As the master turned pieces of red paper into other characters and auspicious figures, she shared information about the history and stories embedded in the traditional craft. An energetic woman from Sichuan translated the master’s comments for the participants. Eventually, the children and adults packed in the rather small space also joined the conversation. The works of the ancient folk art turned into interfaces for dynamic dialogues across cultures.

Based on feedback from past celebrations, we had learned that our guests want to learn more about the myths and customs associated with the festival. Therefore, this year, we launched a new program called Cultural Insight Tours. During the preparation meetings, we realized that Lunar New Year traditions are slightly different depending on the region and family. For instance, while dumplings are a must-have for many families, particularly those in north China, my family never has dumplings for the Lunar New Year—we have radish cake instead. On the tours, we invited Chinese students from American University to share their personal experiences of the Lunar New Year to give visitors a more comprehensive view of its traditions.

I came to Freer|Sackler with a great passion for facilitating interconnectedness through cultural initiatives. At the Lunar New Year celebration, I felt the exchanges of values, traditions, and other aspects of culture. While I missed the radish cake prepared by my grandmother, I embraced the Year of the Dog in a truly meaningful way. 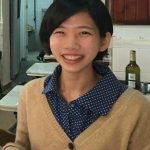 YinYing Chen is a public programs intern at the Freer|Sackler.