Fifteen teens have taken the Freer|Sackler’s exploration of Buddhist art and practice beyond museum walls. Starting in October, I joined the fourteen other high school students on the Freer|Sackler Teen Council to create short films about Buddhist practice in the DC area. Since most of the Teen Council members had limited knowledge of both Buddhism and filmmaking, we thought it would be a great way to learn new things and explore our creative side. And as someone who has always loved watching movies, I was thrilled to have the opportunity to help create one.

With DC Asian Pacific American Film (APA Film) mentors as our guides, the Teen Council decided to create two documentaries on two Buddhist temples, the Kunzang Palyul Choling (KPC) temple in Poolesville, Maryland, and the Ekoji temple in Fairfax, Virginia. After much thought, I decided to take on the role of the director of photography (DP) for the KPC team. A Tibetan Buddhist temple, KPC has a twenty-four-hour prayer vigil and was founded by Jetsunma Ahkon Lhamo, the first Western woman to be enthroned as a lineage holder in Tibetan Buddhism.

Before we started filming, the Teen Council visited the exhibition Encountering the Buddha: Art and Practice across Asia at the Sackler. We were all very fortunate to meet Debra Diamond, the curator behind the exhibition, and ask her questions about Buddhism and the exhibition as a whole. Moreover, she shared her experience making The Texture of Practice: Sri Lanka’s Great Stupa, the exhibition’s immersive film installation, and gave us helpful advice for filming our own documentaries.

As part of team KPC, I visited the temple twice. The first site visit involved a simple tour of the temple and introductions to its members. The visit inspired our documentary’s theme: how the practice of Buddhism has transformed people’s lives. We also began shooting footage of the temple. The extremely cold weather was a major obstacle, as we were not able to film the temple’s stupa garden. Still, this first visit served as a valuable learning experience, teaching us that unexpected events can happen when filming on location.

The second visit consisted of three sets of interviews that became a major part of our film. We had the honor of interviewing two sisters who were raised in the temple since they were babies, two close friends and longtime members of the temple, and two monks. As a team, we had put a lot of effort into coming up with interview questions by delving into different Buddhist beliefs, and we learned a lot along the way. While I was a little overwhelmed by the immense responsibility of being a DP, it was a pleasure to be able to capture the words and emotions of our interviewees on camera.

The Teen Council is so excited to share our films! You can see them both this Saturday at the Freer|Sackler as part of the museum-wide celebration of the Buddha’s birthday. The films will screen at 1 pm in the Meyer Auditorium, followed by a conversation and a reception. Visit Encountering the Buddha before or after to learn more about the art and practice of Buddhism! 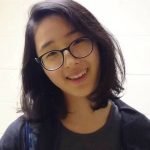 Chelsea Kwak is a senior at the Academy of the Holy Cross in Kensington, Maryland and a member of the Freer|Sackler's Teen Council. She loves to spend her time reading, watching movies, and visiting museums.