In one of my first undergraduate seminars at George Washington University, I had the opportunity to visit the Freer Gallery of Art’s collections storage.

The array of paintings, ranging from a stunningly composed Pahari painting of Sri Krishna with a flute to a fantastical scene of Layla and Majnun from the Mughal dynasty, amazed me. However, what captivated my gaze was a striking set of twenty paintings unified through their vibrant red backgrounds and yellow borders. While categorizing each painting was the preliminary topic of my research paper for the class, unraveling their complex narrative now serves as the focus of my master’s thesis at GWU.

The set includes eleven of the twelve zodiac signs—missing Leo—and representations of the nine planets (navagraha). The navagraha include the Sun and Moon, Mars, Mercury, Jupiter, Venus, Saturn, and the two lunar ecliptics.

While the paintings are significantly damaged, their noticeably uniform color and composition struck me. For the better part of the collections visit, I stared, captivated, at the image of Venus perched atop his white horse and softly gazing to the left. Who made these paintings, I wondered, and for what reason?

The Freer Gallery purchased this group of paintings from Alban G. Widgery in 1968; apart from this, little is known about the set. Even after two years of research, I still had not come across anything like them. Not satisfied with this conclusion, I decided to revisit the set this past January to get a closer look at these paintings. As I began to catalog each image—photographing details and analyzing their damage—two striking details emerged. First, I noticed that the borders were continuous, seemingly cut off in the middle of motifs.

Second, I found that the images of Libra and Rahu have the slightest indication of text in the top left of each image. My newfound evidence suggested one thing: the paintings were not twenty separate images but once joined together as a vertical scroll.

None of the Freer records detail that the paintings were once a scroll, nor have they been studied or published—even Widgery did not acknowledge them as a scroll. I did not solidify my theory until stumbling across a horoscope scroll in the National Library of Scotland’s (NLS) collections.

Strikingly, the NLS scroll’s illustrated figures of the zodiac and planets resemble those of the Freer set in almost every aspect, from their poses to the color of dress. This convincing comparison suggests that the Freer set originated as part of a horoscope scroll, much like the one found in the NLS.

Horoscope scrolls serve as birth records, or janampatri, that forecast the circumstances— good or evil— probable career, and duration of life. Once a child is born, the family commissions an astrologer to draw up a horoscope based on the positions of the stars and planets at that moment. According to Om Prakash Joshi in Painted Folklore and Folklore Painters of India, painters often collaborate with astrologers in the preparation of almanacs, calendars, and decorating janampatri— a practice that likely resulted in the Freer scroll.  Some scrolls contain decorative imagery of the planets and zodiac signs as well as imaginative charts, all determined by the wealth of the patron commissioning them. The Freer paintings are especially captivating, which suggests that they came from a scroll commissioned by a wealthy patron.

Unfortunately, these scrolls deteriorate easily because of the extreme climate in India and the wear and tear of a horoscope’s daily use. While this explains their deterioration, I still wondered how these images that were once part of a scroll became a set of individual paintings. I asked Dr. Debra Diamond, curator of South and Southeast Asian art at the Freer and Sackler, and she immediately responded that if the scroll was damaged, dealers would likely have cut it up to sell its paintings to collectors.

My thesis acknowledges these paintings were once a scroll, but further explores their current condition as a set of twenty paintings and how this fragments their original narrative. I can imagine the Freer paintings alongside decorated charts and prognostic text, but this is not their reality today. Investigating these paintings makes me feel as though I have been unrolling their narrative, but when I saw these paintings in storage two years ago, they were—and still are—beautiful paintings. 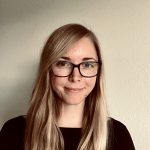 Megan Culler was a Curatorial intern for Dr. Debra Diamond at the Freer and Sackler Galleries in summer 2020. She holds a BA in Art History from George Washington University with her MA forthcoming in Spring 2021.