For the past two years, I have been a member of the Teen Council at the Freer and Sackler. At our meetings, we have the opportunity to explore the collections and learn more about the works on view. One of my favorite objects can be related to a quirky genre of modern literature.

In gallery 18 of the Freer, I came upon this sculpture in a display of ancient Chinese bronzes. It felt out of place because of its more modern industrial look. I immediately pictured this bronze bird whirring to life in the sci-fi genre of steampunk. Based on the fashions and lifestyles of the Victorian and Edwardian eras, steampunk enthusiastically combines mechanical images of an industrial era with the vintage elegance of England’s upper class. This made me wonder: What is a bird like that doing in a place like this?

After reading the object label and doing some research, I learned more about the cultural and historical context of this work. This bird was crafted around 2,500 years ago at the Houma foundry in the Chinese state of Jin during the Middle Eastern Zhou dynasty. When I initially saw it, I assumed such an intricate piece would simply be ornamental. Indeed, the gold characters on the back of the head translate to “a gentleman’s esteemed bird,”which helps to explain its extravagance. This bronze bird is actually a zun, a drinking vessel for grain-based alcohol. A cleverly camouflaged join at the neck opens to delineate the edge of the container and the inside of the lid. A hidden hinge allows the beak to open up as a spout.

Having trouble imagining this as a drinking container? It might be helpful to understand that such a sumptuous bird would have been used only on special occasions by elite members of society in ancient China.

A closer look at this zun helped me see that this piece, while highly realistic, takes liberties in its shape and form. The talons are unusually stubby, and interlocking patterns take the place of feathers on its back and belly. Realizing this made me appreciate the knowledge and skills of ancient Chinese craftsmen.

These detailed motifs and designs, along with its rotundity, make it endearingly clunky. This interplay—similar to the one between machines and society in steampunk—is what makes the bird so fascinating to me. 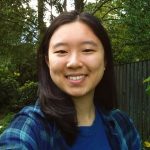 Ivvone Zhou is a junior at Montgomery Blair High School in Silver Spring, Maryland. She helps run the Mural Club, participates in Biology Club, and tries to manage a STEM-centric course load. She is fascinated by bioinformatics and hope to work in that field. She likes to draw, paint, and listen to music—but when nobody is around, she sings show tunes and pretends to be Julie Andrews.